Winding along a narrow strip of land between mountains, dramatic cliffs and the Indian Ocean coastline is Hermanus, surrounded on all sides by nature. This seaside town, southeast of Cape Town in South Africa’s Western Cape Province, is best known as a whale-watching destination, but that’s not all it has to offer. Mountain walks, beautiful beaches and lagoons, secluded forests, crashing waves and prestigious golf courses; and all wrapped up in some of the most spectacular and botanically rich parts of the Cape Floral Kingdom. A short drive from Cape Town along Clarence Drive with its breathtaking views, a visit to Hermanus is easily slotted into a Western Cape itinerary, and I highly recommend it.

Hermanus is probably best known for its whale watching, and the cliffs overlooking Walker Bay are the perfect vantage point for that. The World Wide Fund for Nature (WWF) ranked Hermanus among the top 12 whale watching destinations in the world, so no article on this destination would be complete without mentioning these gentle giants. 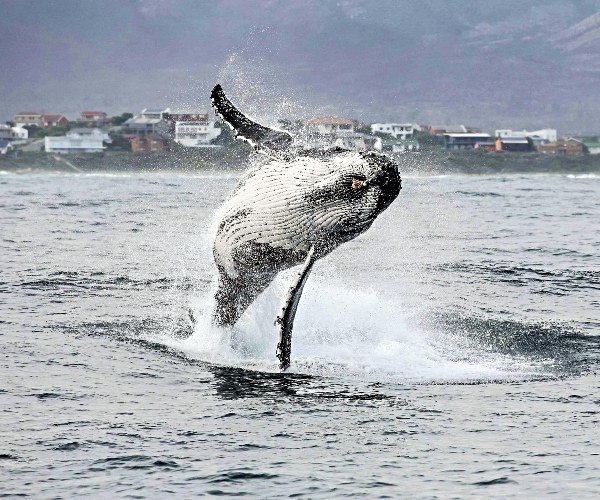 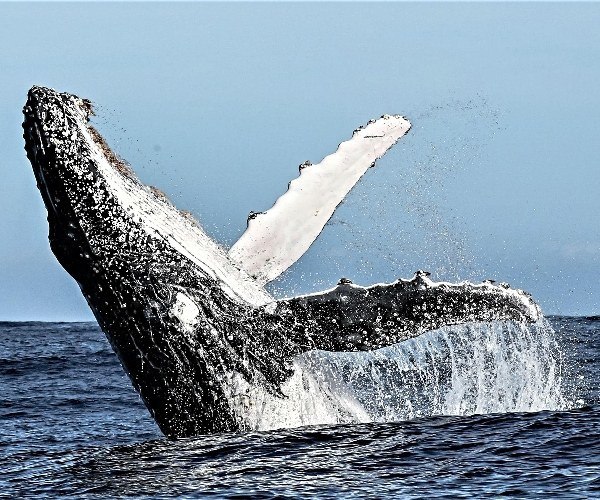 Hermanus is a breeding ground for southern right whales. Each year, whales travel thousands of miles from the cold waters of Antarctica to give birth to their young and frolic in the sheltered bay. The best time to visit Hermanus for whale watching is between July and November, and the town’s two whale festivals in August and September celebrate these wonderful creatures. Hermanus is home to the world’s only ‘whale crier’, a tradition that began in 19291, and from June to December his cries echo through the small town, alerting visitors to any offshore whale activity, along with a few kelp blasts . honk. 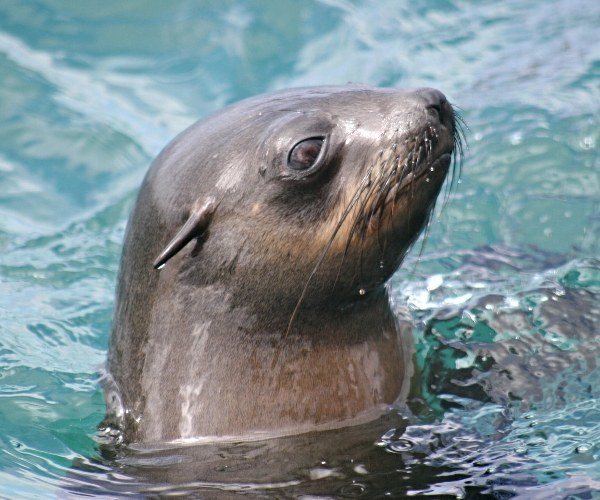 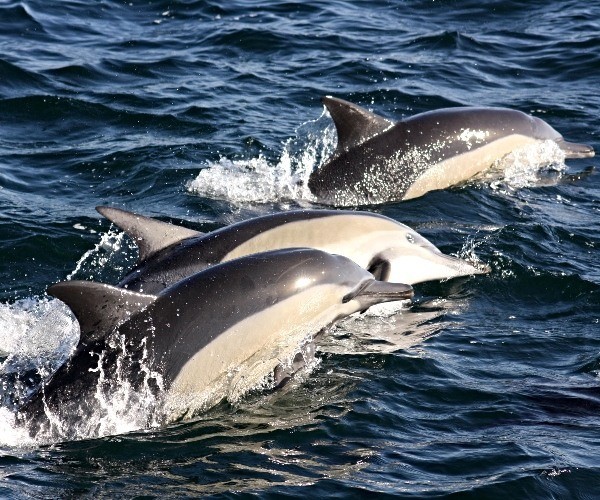 If you want to get out on the water and a little closer to the whales, ethically and with a company that is very committed to conservation, then marine dynamics in Gansbaai, about 45 minutes by car, offer a “Marine Big 5” experience. You will embark on a 14m catamaran, for a boat cruise of 2 to 3 hours, depending on observations and weather conditions, in search of whales, dolphins, seals, sharks and African penguins. Each trip is led by an experienced marine biologist.

It is on the Hermanus Cliff Path that some of the best land-based whale watching takes place. Running almost the entire length of the town, the cliff path meanders for 11 km along the rugged coastline. As you walk around you have a great view of the mountains, the ocean and the fynbos. At regular intervals on the rocks and cliffs overlooking the sea, a series of wooden benches provide perfect vantage points for whale watching. We hiked the cliff path after breakfast each day, walking one way the first day and the other the second, the whole trail takes about 3.45 hrs. 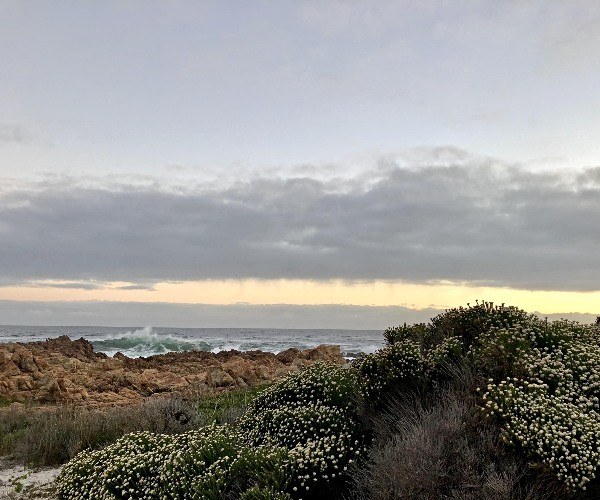 The cliff path is part of the Fernkloof Nature Reserve, and its fynbos-covered mountain slopes hug Hermanus, forming an imposing backdrop to the town. The Fernkloof Reserve has a trail network of over 60km, ranging from moderate to strenuous hikes, all offering spectacular views of Hermanus and the vast expanse of Walker Bay. Over 1,250 plant species, including several unique types of fynbos, have been identified here. The reserve is also home to a fascinating variety of birds, with almost 100 species in this small area. We walked out of our hotel, and a few minutes later we were inside the reserve, climbing the steep hill to a lighthouse at the highest point overlooking Hermanus. It was a great hike and the scenic views of the ocean, beaches, and lagoon were fantastic. 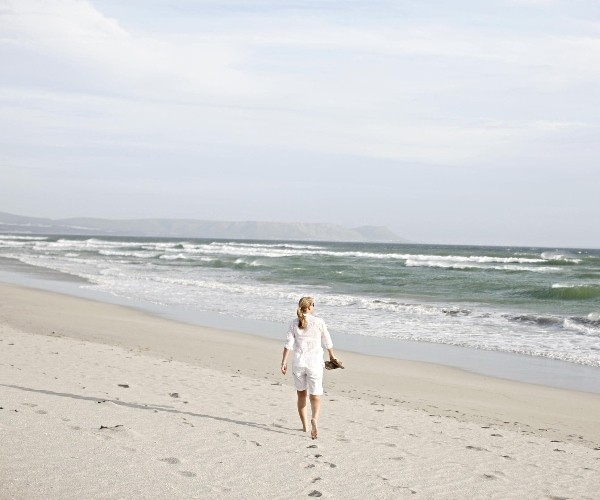 A short walk along the cliff path from our hotel was the impressive 18 km of Grotto Beach, the longest beach in Hermanus. Rippling white capped waves and seemingly endless sand, we walked again and again and had the beach entirely to ourselves. 2km along the beach we reached the Kleinrivier lagoon, the same lagoon we had seen earlier on our hike to the beacon. The lagoon is 10 km long, just over 2 km wide at its widest point. It is shallow and warm and home to an array of birds, as well as being ecologically important for the many species of fish which spawn here before heading out to sea. There is a bird hideout here which is open to all. 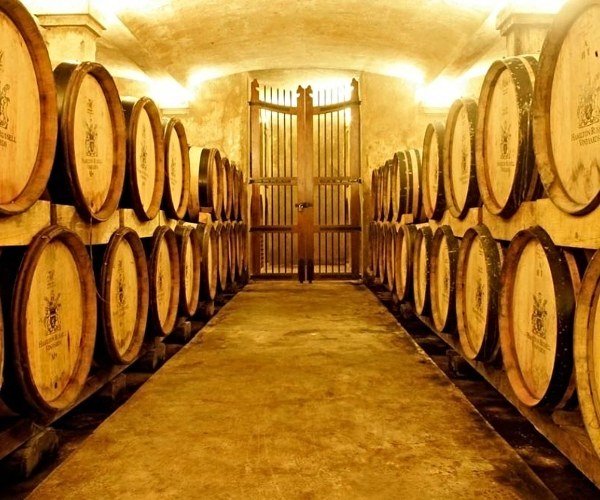 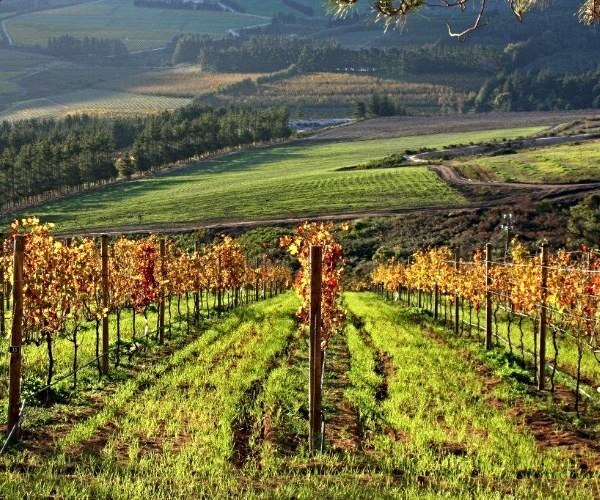 Leaving the beach behind us, we set off to discover another facet of Hermanus: wine. The vineyards of the Hermanus Wine Route, the southernmost in Africa, produce high quality wines. Behind Hermanus is the valley of Hemel-en-Aarde, which is fast becoming one of the most exciting wine regions in South Africa, as well as one of the most beautiful, Hemel-en-Aarde means “Heaven and Earth” in Old Dutch and Afrikaans. The valley has more than 15 renowned wine farms and offers a variety of excellent wines.

15km from Hermanus is the beautiful Benguela Cove Wine Estate, renowned for producing elegant cool-climate wines. Located on the edge of the Bot River Lagoon and framed by views of the Kogelberg Nature Reserve and the Atlantic Ocean, we had a very enjoyable afternoon indeed, sampling everything from their MCC, to the Dry Rosé, Chardonnay, Pinot Noir, Collage and finally Malbec. 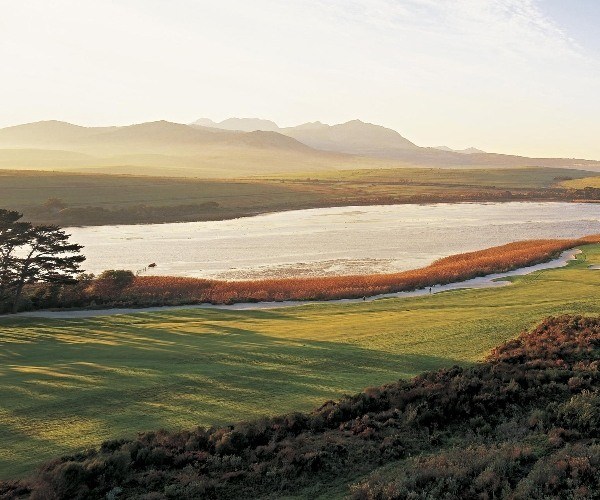 If you are reading this article anywhere other than A Luxury Travel Blog, chances are this content was stolen without permission.

Please note the web address above and contact A Luxury Travel Blog to let them know about this issue.

Thank you for your help in the fight against content theft. 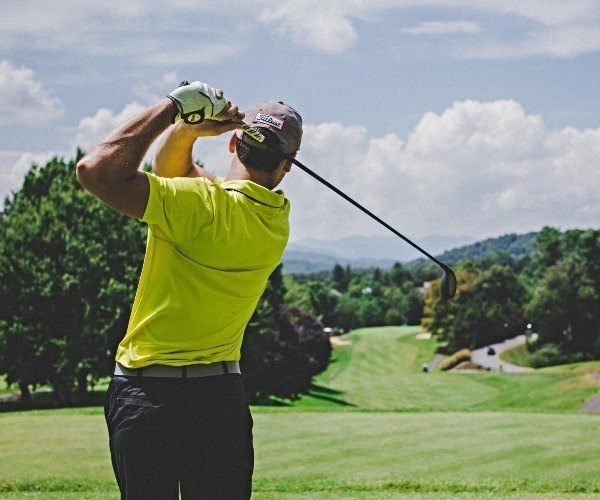 For golf enthusiasts, across the Bot River Lagoon from Benguela Cove Wine Estate is the Arabella Golf Course and 30 km away, on the other side of the city is the Hermanus Golf Club , where curious baboons used to sit quietly and observe the players. These are two of the most prestigious golf courses in South Africa. You can choose between 9 or 18 holes at Arabella, or start with an early morning tee time at the 27-hole Hermanus Golf Club.

On a darker note, delve into the history of the area and discover one of South Africa’s most famous shipwrecks. At 2 a.m., on a clear and calm night, on the 26the February 1852, HMS Birkenhead rounded the Cape of Good Hope and struck the rocks of Danger Point, near Gansbaai. She carried British troops to the Border Wars, along with about 26 women and children. Water rushed through the damaged hull and many soldiers drowned, still lying in their hammocks. Tragically, of the eight lifeboats, only three could be used, and the wreck of the Birkenhead is famous for the story of the soldiers who stood stoically alongside, while women and children were first loaded into the some seaworthy boats. Many soldiers sank with the ship, most drowned, but some were swept away by sharks. Of the approximately 643 passengers and crew on the Birkenhead, only 193 survived. The Birkenhead is known, not only for its terrible death toll, but also for being the first example where the principle of “women and children first” was applied. 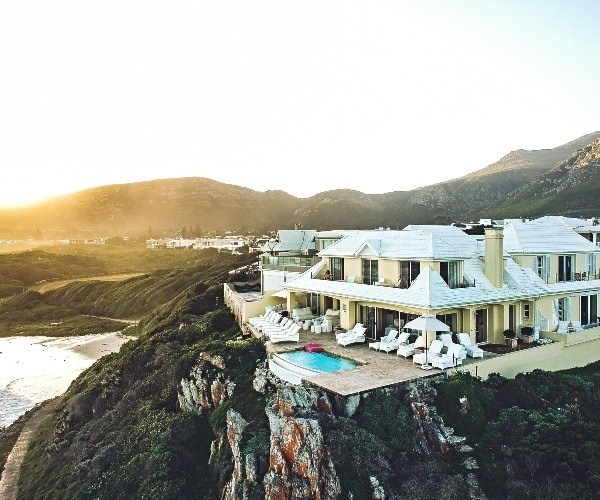 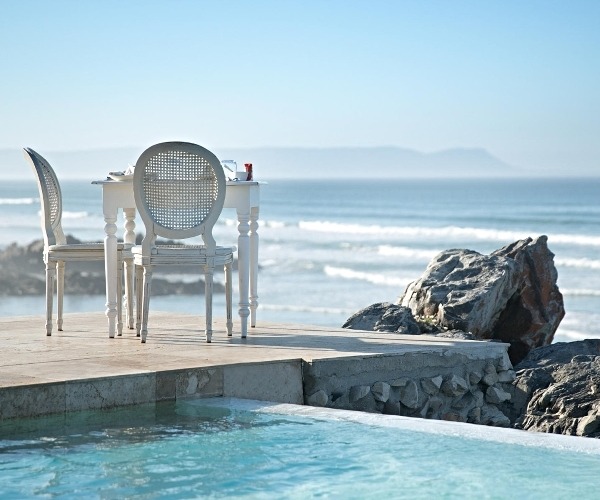 Taking its name from the tragic shipwreck a hundred years earlier, in 1952, the Birkenhead Hotel opened its doors. In the 1970s, investors bought and demolished this beautiful old hotel, intending to build a vacation timeshare there. The site sat vacant for years, before two private homes were built on the site. The two houses were eventually reconfigured and refitted to form the beautiful Birkenhead House which opened in 2003. With a central courtyard which contains a swimming pool and has a bar, spa, TV room and gym to one side, Birkenhead House is considered as one of the best boutique hotels in South Africa and certainly lives up to its reputation. 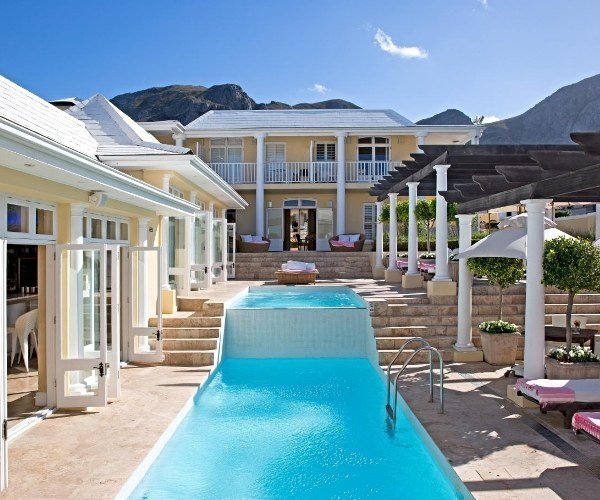 Birkenhead House is a chic beach hotel, and it sets the standard for luxury in Hermanus. With its contemporary décor, quirky opulence and clifftop position overlooking the ocean, with lapping waves just below, Birkenhead House is a special place and a wonderful getaway. There are just 11 rooms, ensuring personal attention at every turn. The rooms themselves are individually and elegantly decorated. There are rooms facing the sea with private balconies and magnificent views, rooms with panoramic mountain views and other rooms, like ours, with their own private pool. The parlor and living room has an ornate fireplace, gilded mirrors, plush furnishings, and ocean views through floor-to-ceiling windows. A collection of original artwork and sparkling chandeliers hang throughout the hotel. 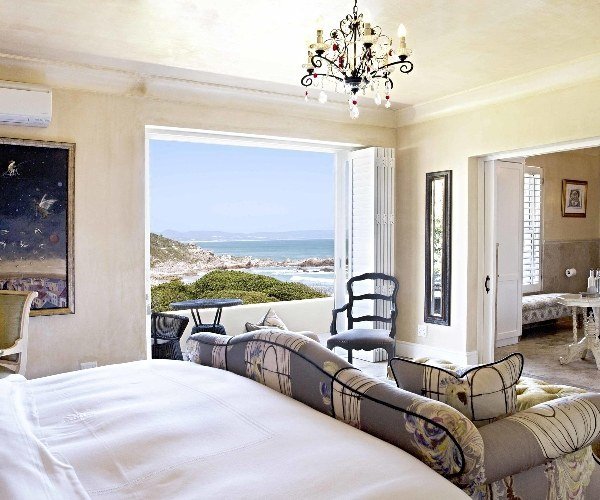 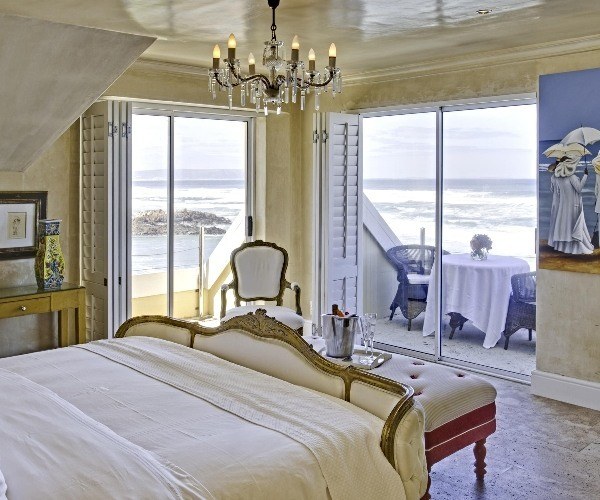 At dinner, we spotted a genet, with its long, slender tail and pointed nose, surreptitiously crossing the poolside paving, and from our breakfast table we saw a pod of dolphins making their way in water, while a handful of surfers braved the cold to paddle beyond the waves. At the right time of year, you can spot southern right and humpback whales just meters from shore, without even leaving the hotel. In fact, with an all-inclusive rate, where all meals and drinks are included, guests never need to travel to the hotel! At each meal we had personalized menus waiting for us, with delicious dishes to choose from and servers who always knew exactly which wines to suggest for each course we chose. 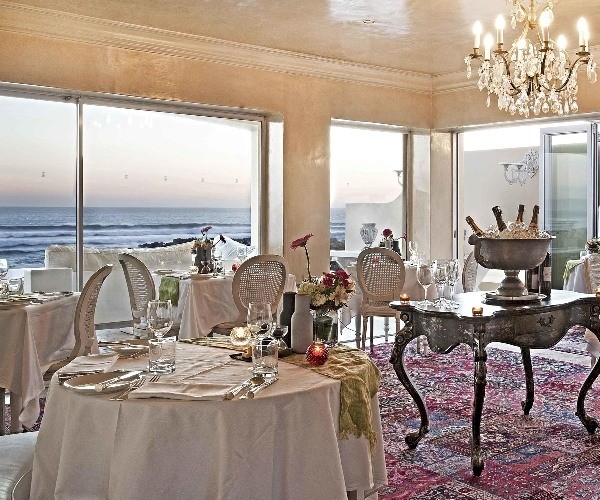 From Birkenhead House, if you can get away, you can walk along the cliff path to the town of Hermanus, where you will find a variety of galleries, shops, craft markets, wine bars and restaurants to explore, tucked away in quaint side streets. When you are done, if you don’t feel like making the return trip, the hotel will be happy to pick you up and any purchases you have made.

Over the years, the former small fishing town of Hermanus has become one of South Africa’s most well-known and beloved tourist destinations, and you should definitely add it to your next Cape Town itinerary.

No comments to show.